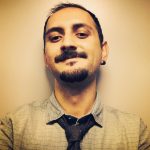 Sefa Kırlı
İsim
Sefa Kırlı
Hakkında
Sefa Kırlı is a Supervisor at Yasar University School of Foreign Languages in İzmir since 2015. He has been working as a language instructor since 2010. He started teaching at Dokuz Eylül University School of Foreign Languages, Modern Languages, Conservatory and School of Nursery. In 2012, he moved to Helsinki, Finland as Comenius Language Assistance. In Finland, he taught English to Finnish and Swedish students at Sipoonjoen Koulu, Leppätäen Koulu (Immersion School), Kyrkoby Skola and Kungsvägen Skola. He also did some intercultural projects like Sing in 4 Languages (Turkish, Finnish, Swedish and English), Geometry in Life (E-twinning Project). After his great discovery of Nordic culture, he moved back to Turkey and joined the Turkish Army. In the army, he taught English at Non-Commissioned Officer (NCO) Vocational College. Since the summer of 2014, he has been teaching English at the School of Foreign Language at Yaşar University.

Nowadays, he is forcing his students to record video homework, teaching them how to use Twitter as writing practice platform and using every means available for his colloquies to use Google for Education.
He is into song writing and has been playing with a metal band called Baraka for over 10 years. He was born in a little Aegean town and raised by his beloved parents Filiz & Kadir. He has a fun-tastic brother named Kıvanç. He is living happily after with his angelic girlfriend, Berçin and adorable cat, Pırtık.